The integration between the FMS and the hardening furnace has increased the capacity, shrunk the storage, and improved the working environment”, says Lorin Mayer Nordström, chief of method development in production technology at Volvo Construction Equipment in Eskilstuna.

What comes out of combining a hardening plant with an FMS? 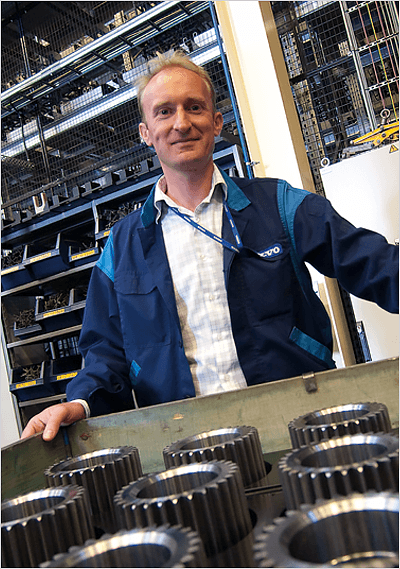 The answer is increased capacity, greater availability, and a better working environment. – Still a lot of people wonder what we are doing when they see the high bay storage, says Lorin Mayer Nordström, chief of method development in production technology at Volvo Construction Equipment in Eskilstuna.

Volvo manufactures transmission and axle components for wheel loaders, dumpers, and road scrapers. The components are delivered to five factories in Europe, the USA, and South America. 80 percent of everything that is manufactured in Eskilstuna passes through the hardening plant. The heat treatment is critical in a double sense. First, hardening is essential for the quality and wear strength. Second, high availability of the plant is required to guarantee secure deliveries. – We used to have a large buffer stock. The hardening plant could stand still for a whole week with no consequences. Today we have no buffers, says Lorin Mayer Nordström.

Evens out the flow

Volvo focuses strongly on Lean Production and due to this many visitors at the heat treatment facility are, to put it mildly, surprised when they see what looks like a high bay storage. – It is a magazine to even out the flow between machining, which is carried out with varying speeds depending on the type of component and the customer needs, and a hardening furnace that processes items at an even pace, is the answer. In addition to this, the magazine has taken over the handling of heat treatment fixtures, which used to be handled manually.

Volvo built the hardening plant in 2005 and it was commissioned in 2006. The decision was preceded by careful studies and visits to hardening plants all over Europe. The goal was to create a production plant with low tied up capital and high availability with a possibility to expand without changing the flows in the rest of the factory.

Only one of the studied plants was close to the requirements. It was located at the transmission plant of a former group sister Volvo Cars in Köping, nowadays known as Getrag All Wheel Drive. The plant was built in the beginning of the 1980’s and consisted of a high bay storage integrated with a hardening furnace. 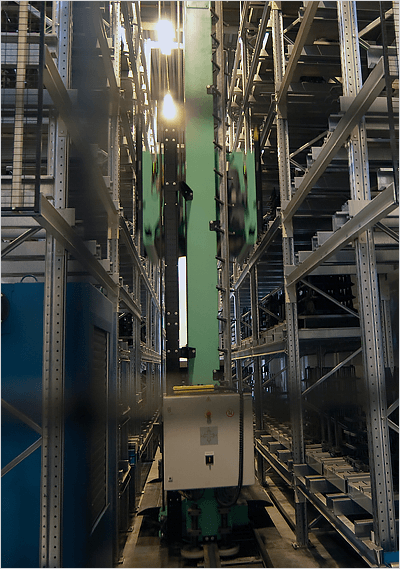 There were good experiences of similar machining solutions in Eskilstuna. There were already six FMS systems connected with machining centers. All of them were delivered by Fastems and Volvo knew that this was a supplier that fulfills the requirements for high availability and quick service. – We ordered the new hardening turnkey workshop from the furnace manufacturer, but appointed Fastems as the supplier of the FMS system, says Lorin Mayer Nordström. The turnkey purchase was made keeping in mind that integration between the two control systems is the most critical issue. Volvo wanted the FMS system to control the material flow to and from the furnace, which in turn was going to provide feedback to the order-giver.

The flow through the plant has been planned carefully. For the rest of the factory, the hardening workshop consists of two roller conveyors. One is used for loading soft components to the FMS and the other brings out the ready products.

What makes this plant different from many others is the wide range of items. We are talking about 100 products. In addition to this, the system keeps an eye on all hardening fixtures, on which all items are put up for hardening. The first thing that happens when items arrive is that they are placed on a pallet place with a crane. After this, the right type of fixture is ordered and then loaded with the items. The result is then sent back to the magazine. – In the future, the construction of fixtures will be handled by robots straight after the machining, Lorin Mayer Nordström tells. The ready fixture waits for its turn. It is then brought down by the crane and the loading pallet is automatically removed before the fixture moves on into the furnace. The FMS also delivers the right recipe for the current product to the control system of the furnace. Integration this tight had never been attempted before. This is why the high bay storage was built so that it can be loaded and unloaded from the outside. – We have never had to use this possibility, although we have periodically operated the plant with a higher capacity than it was projected for, says Lorin Mayer Nordström.

After the heat treatment and cooling, the items return on another roller conveyor, they are loaded onto a pallet, and then put back in the magazine.

The flow is not the only thing that has been improved. The system is also more flexible than conventional solutions and it has improved the working environment and ergonomics. The components are heavy and some of them weigh up to 25 kg (55 lbs). The number of manual work phases has been reduced significantly and moreover, the working method enables the work to be planned in a better way. At temporary absence of staff it is possible to e.g. use the magazine to even out the workload and thus guarantee secure operation of the heat treatment.

After three years of operation with high availability, Volvo is now preparing for the next step. The plant is prepared for double capacity. This will be achieved by extending the magazine and installing another hardening furnace. Experience shows that a single stacker crane has the capacity and availability to serve two hardening furnaces.