On 21st May 2007, what is believed to be the world’s first flexible manufacturing system (FMS) for automated production of components made from carbon fibre sheet went live at BAE Systems Samlesbury, UK. It is being used to produce around 120 different skins that form the aft fuselage and empennage (vertical and horizontal tails) of three variants of the F-35 Lightning II. The facility is based on a Dorries Scharmann Technologie (DST) GmbH five-axis, high-speed machining centre that machines and drills the moulded composite panels. In addition, a Metris LK rail-type co-ordinate measuring machine (CMM) inspects them. Linking the DST and Metris machines and orchestrating the entire FMS is a Fastems computer-controlled system. This moves over 20 machine and storage pallets around the production cell, stores them when not in use, and manages manufacturing to the production schedule.

The large size of the pallets, which measure 3.3 x 2.3 metres and weigh up to 8.2 tonnes when loaded, makes this an unusual manufacturing facility. However, what makes it remarkable is the vacuum management equipment built into all of the pallets and into every station that they visit throughout the FMS.

Therefore, a flexible, carbon fibre panel can be clamped onto the matching 3D profile of its bespoke, pallet-mounted fixture and held continuously under vacuum during the entire production process. Through this, unnecessary process variables are eliminated.

Pushing the limits of technology

Derek Holden, BAE Systems Project Manager commented, “Our relationship with the equipment suppliers, including the manufacturer of the temperature-controlled booth that contains the FMS, was crucial to the success of the project. All acted as part of a team together with our design and production engineers, and each was individually responsible for, and committed, to meeting their targets.”

“Fastems is a world leader in FMS logistics but this installation pushed even them to the limits of their technology”, continues Holden.

“The very high accuracy components delivered by the facility enable the aft and empennage assemblies to achieve the exacting design requirements of the products, notable interchangability ensuring the smooth interface between mating units during final assembly of the aircraft. In addition, panel replacements in the field will fit first time, avoiding rework and aircraft downtime in service.”

A history of reliability

Two other Fastems FMS are in operation at Samlesbury serving Mitsui Seiki and Makino machining centres respectively, the first dating back to 1997. Both these systems operate extremely reliably producing aluminium and titanium structural parts for the F35 Lightning II programme as well as for Eurofighter Typhoon and Airbus.

Phase 1 of the project, which was handed over in May 2005, involved building a 45 x 18 x 9 metre high room, the temperature of which is controlled to 20 ± 1OC, and installing the DST and Metris machines.

DST supplied a machine bed system for transferring fixtured panels under constant vacuum into the machine tool, and an identical system for transfer into the CMM to a very high level of repeatable accuracy. At the time, foundations were prepared ready to support the Fastems store in phase 2, which commenced the following year and took 12 months to complete.

As panel volume increased, BAE Systems recognised the limitations of the phase 1 machine loading methodology and its implications for effective machine utilisation. In order to mitigate the effects of fixture/pallet set-up, an early introduction of the phase 2 Fastems system was supported.

Consequently, spindle utilisation has been raised from 60 to around 90 per cent, increasing output from the machine by up to 50 per cent compared with when they were transferring pallets manually.

As the project progresses through to low-rate initial production and to full production, further machining centres and measuring machines will be added to the FMS, which was designed from the outset to be expandable. Extra machines and loading stations can be added at either end, which would also increase the number of pallet stations by virtue of the increased store length.

Additionally, the capacity of the store could be further increased by up to 100 per cent, without altering its length, by adding a second, three-tier rack of pallet stations behind the existing rack. The rail-guided, 3-axis CNC stacker crane that runs the length of the store is able to handle pallets on either side.

The Fastems store currently has 30 pallet positions, two 700 mm high, twelve 1,100 mm high and sixteen 1,500 mm high to accommodate pallet loads of different height. In addition to the two loading stations, there is a third interface to the store that enables a machined component to exit briefly so that an operator can wipe it clean and vacuum off excess carbon fibre swarf prior to the panel being inspected. 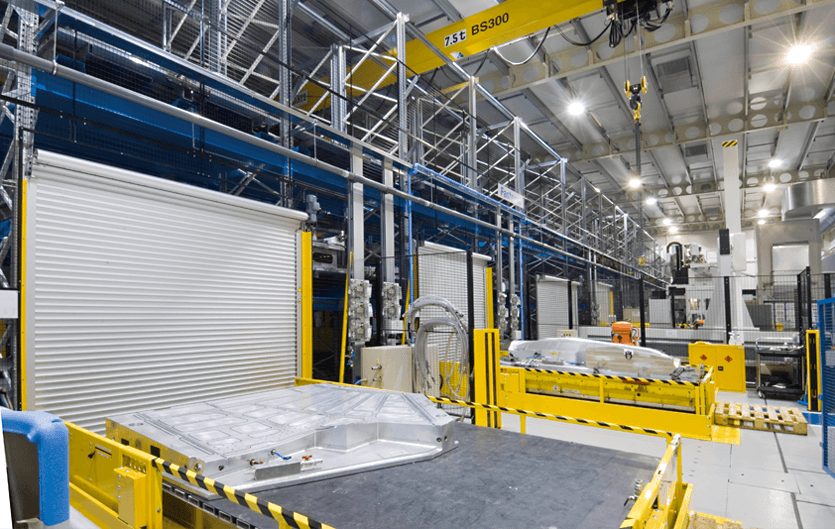 In charge with FMS

Controlling the efficient, small-batch production within the FMS is Fastems’ Windows-based MMS (manufacturing management system) software. Its core tasks are control of the stacker crane, and scheduling of automatic pallet transfers between the storage positions, loading stations, cleaning station and machines.

Job scheduling is based on the first-in/first-out principle which can be over-ridden by the operator. When a pallet is sent from a loading station into the system, a route is assigned to it and the system automatically controls the defined sequence of steps and ensures that the correct NC program is downloaded when the pallet reaches the DST or Metris machine.

The main window in the control displays a mimic of the system and uses colours and icons to advise the real-time status of all the FMS elements. The status of the pallet within the system can be checked at any time. The MMS log lists all events, warnings and alarms and there is a modem connection for remote diagnostics from Finland via a secure switch.

Aircraft have exploited carbon fibre for many years owing to its lightness, high stiffness and strength. Fastems’ experience in the forefront of manufacturing and integrating the requisite FMS equipment makes it a global leader too.