Reiden Technik and Fastems are implementing an Industry 4.0 project for Daimler AG: Industry 4.0 is now much more than just a theory. An ambitious project at Daimler AG in Sindelfingen shows just how much potential the strategy holds if existing technologies are used in a consistent manner.

Daimler AG’s Sindelfingen plant mainly produces E-Class and S-Class vehicles, including all derivatives and the AMG GT sports car. The site has its own toolmaking facility, which together with plant engineering forms the equipment manufacturing unit, which employs around 1,200 people and produces the press tools for the production of Mercedes Benz car bodies. The equipment manufacturing unit with its toolmaking and plant engineering departments belongs to what is known as the “TecFactory”. 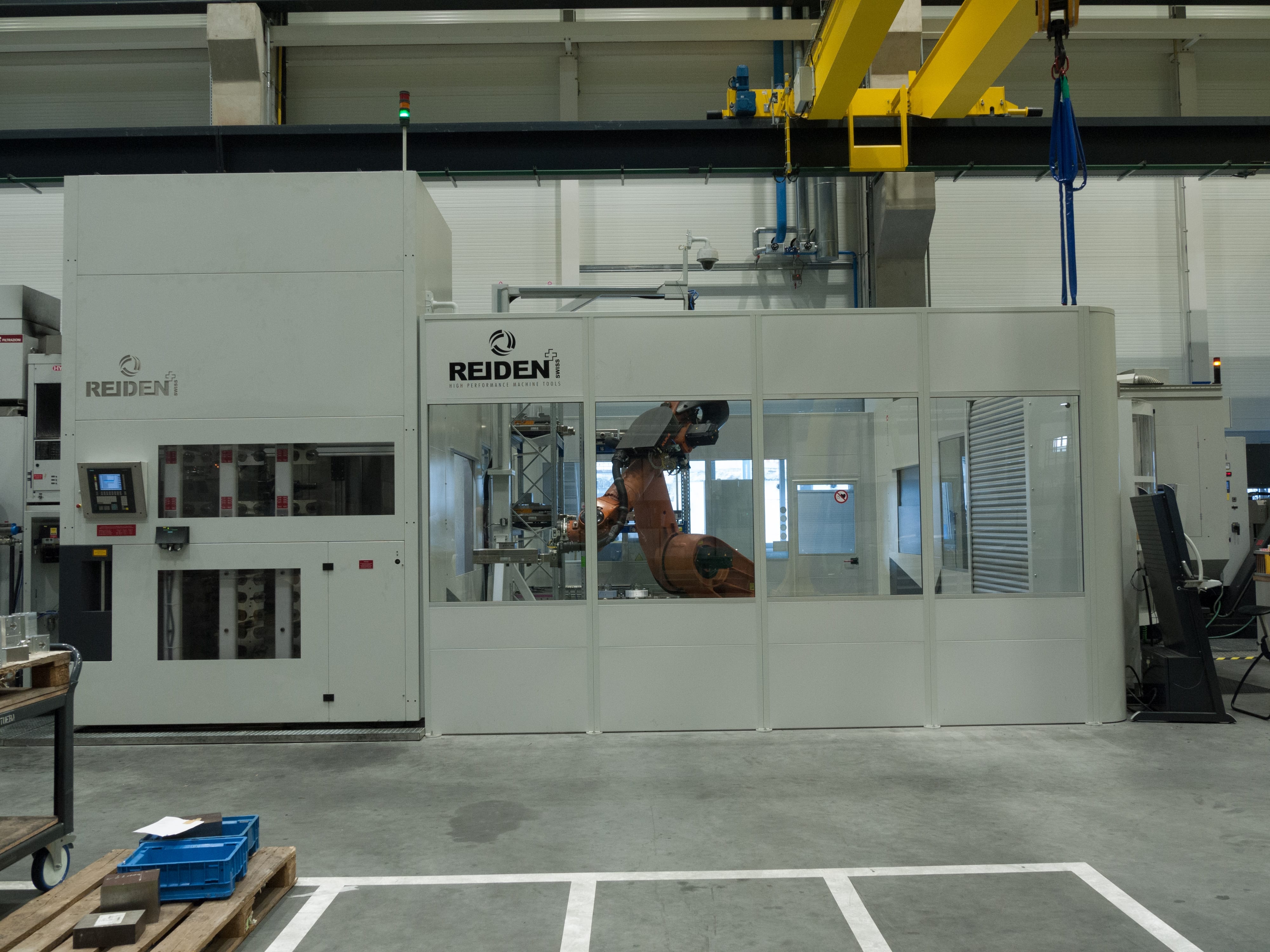 The multifunctional manufacturing system for small parts went into operation in mid-2015.

The toolmaking capacities were expanded in 2015, with a new hall built to house a separate section of the department. “We took this opportunity to ask ourselves what a forward-looking toolmaking facility for car body production would look like. One of the results of our analysis was the development of a multifunctional manufacturing system for small parts, with which we can fully automate the production of single items,” explains Paul Schmidt, project coordinator at Daimler in Sindelfingen and responsible for machine and plant design in toolmaking.

All this meant that the toolmaking department needed two 5-axis machining centers for producing mold inserts for the large press tools. Workpiece handling, including carrying the workpieces to and from the machines, was to take place using a robot-based pallet system. What’s more, in order for the system to be “multifunctional”, the induction hardening process had to be integrated into the automation solution. Ultimately, the automation solution’s central control system required an MES (manufacturing execution system) which could be integrated as easily as possible into the existing system environment, with among other things an interface to the toolmaking department’s production planning and control system. “Based on what we required, we then drew up a specification and offered the project to the market for tendering, and when this was completed we realized that we had started an Industry 4.0 project,” says Paul Schmidt.

The general contractor that was finally engaged to carry out the ambitious project was Reiden Technik AG, which chose Fastems as an expert partner to jointly implement key elements of the Industrie 4.0 strategy during the project. 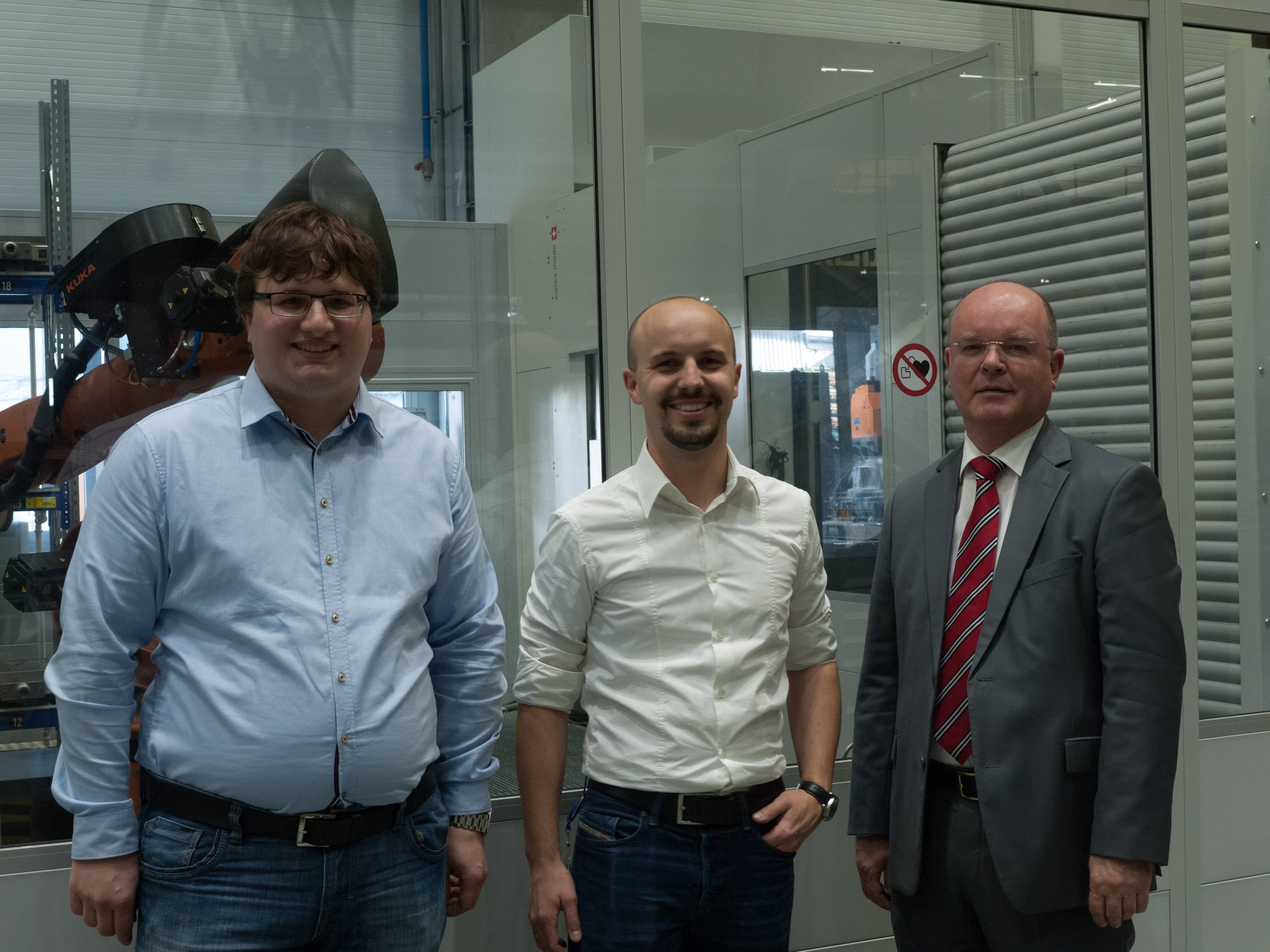 “It wasn’t a simple task”, stresses Michael Müller, the development engineer at Reiden Technik in charge of the project. The aspects he considered most challenging included custom modifications of the RX10 5-axis machining center for robot-based loading and unloading, and above all adapting the very different interfaces in the manufacturing system.

He describes the situation:

“The solution includes a whole lot of components that have the internal intelligence to communicate with each other. This starts with the toolmaking production planning and control system, which should have a complete overview of production. This system communicates with MMS, the Fastems manufacturing management software. As the MES, it controls the manufacturing cells and autonomously plans the production process in the manufacturing system, based on data such as order information and schedules.

To do this, MMS receives all the necessary parameters and programs from the production planning and control system, while at the same time receiving information such as the machine status, the tools and the program running times, and sending it to where it is needed, for example to a Daimler employee when a substandard part is produced.

In turn, the manufacturing system’s tool presetter measures the tools and sends this information to the RFID chips on the tools so that these parameters can be transferred to the machines before machining a part.

The two machining centers are part of the overall system’s decentralized intelligence and pass on data to MMS such as production and process information. And this is just a small, simplified part of the very complex network.”

Despite the highly complex technology, Paul Schmidt believes that the focus is still on human beings: “However, the machine operator’s role changes from being simply an operator to being a manager for the multifunctional manufacturing system, who no longer only has to understand how a single machine works, but also the processes within this complex network.”

In order to avoid problems within this network and therefore potential downtimes and production stoppages, all the technology partners involved in the project must be able to connect to their components quickly, directly and at any time. Remote access is the best option for this in terms of independent expertise and production, because the project partners are based, for example, in Finland, in Switzerland and at various locations in Germany. They can also refine the overall system remotely should new requirements arise. In such a case, contact is made to the project partners’ experts who then access their component in the production system and make modifications, such as updates with expanded functions. 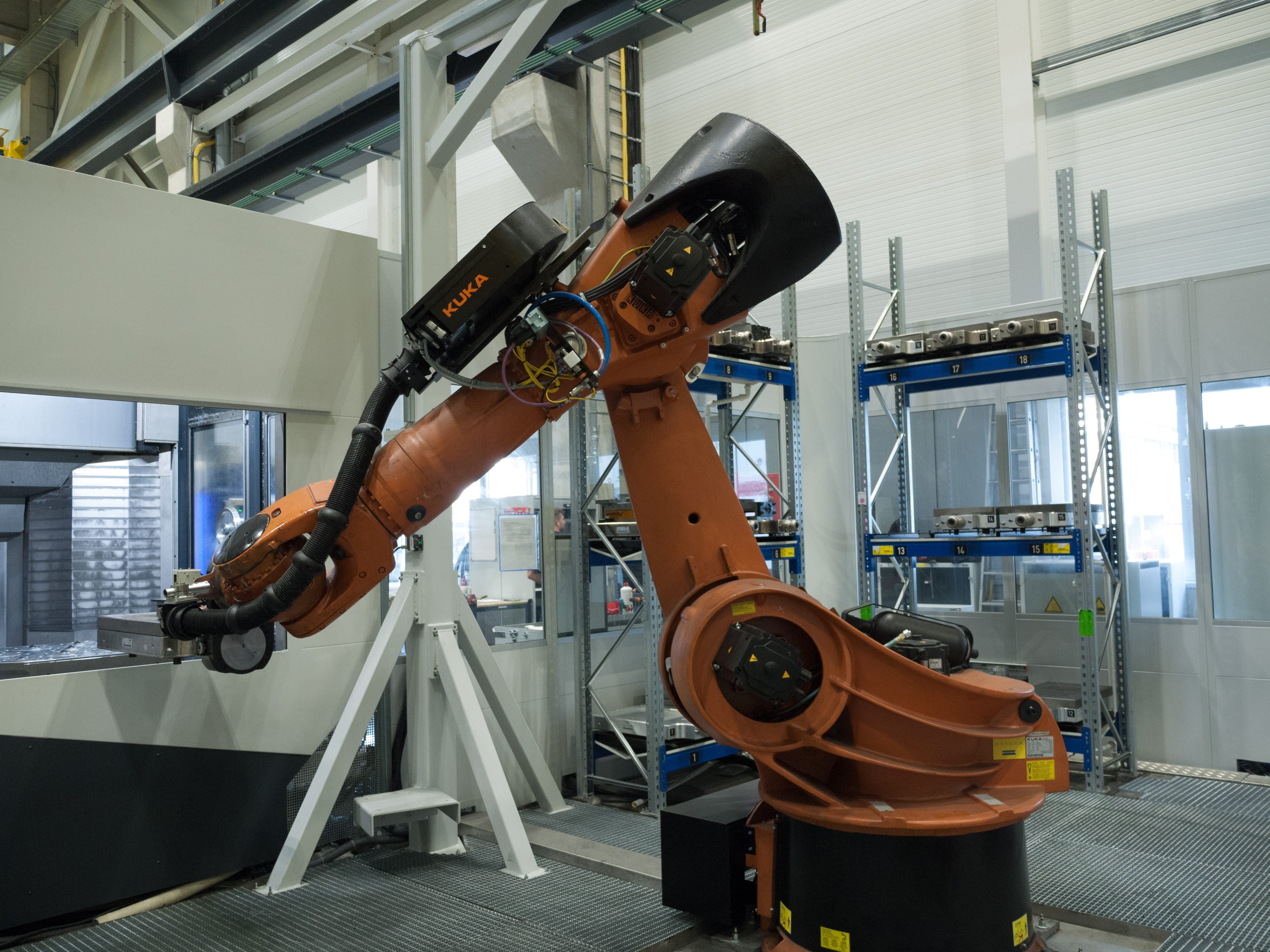 The robot has a payload of 500 kilograms, and loads and unloads the two five-axis machining centers.

As mentioned at the beginning, the multifunctional manufacturing system has an integrated, automated induction hardening system. Induction hardening, which previously involved great logistical effort, is carried out by a robot in the system’s non-productive periods. The times when it does this are decided by the MMS cell controller, based on the current production planning. This means the robot is no longer just a transport system, but also a processing machine, where the entire induction hardening process is programmed offline, with conflicts completely simulated in advance, thus merging virtual and real production.

An essential requirement in the project was the desire for an intelligent machine sensor system, which not only automatically monitors each machining process, but can also teach itself unknown processes without external intervention. For example, if a tool is used for the first time for machining on one of the RX10 units, the system must automatically adjust, learn and save the process limits with regard to torque and vibrations. In this way, static upper limits that indicate tool overloads are identified, while during the machining process, dynamic limits identify sudden signal changes, for example caused by tool breakage. This means that for every combination of tool, material, feed rate and speed, the machine sensor system receives a scenario that has been learned over a certain period of time and can then be called up whenever necessary. Thus, if a previously learned process with a specific tool is repeated on another workpiece, the system has all the correct parameters it needs for this.

The multifunctional production system for small parts has been in operation at Daimler AG’s toolmaking facility since 2015. In that time, those in charge of the project have still had to tweak many parameters to ensure that the automation solution meets all the requirements. But this should not be surprising, because Industry 4.0 is not a static process, but a continuous one, which requires constant optimization and expansion of the functionalities and capabilities of systems developed in line with the strategy.